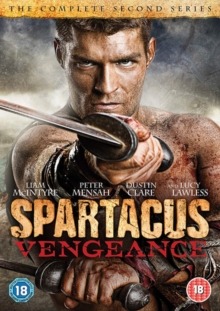 All 10 episodes from the TV drama which follows on from the events of 'Spartacus - Blood and Sand'.

Ancient Rome's most famous gladiator, Spartacus (Liam McIntyre), is no longer a slave but the leader of an armed rebellion that threatens to bring the Roman Empire to its knees.

However, will Spartacus' desire for vengeance against the man who sold his wife into slavery distract him from the task in hand?