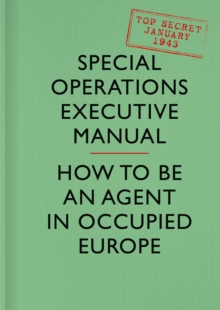 SOE Manual : How to be an Agent in Occupied Europe Hardback

The actual course given to all secret agents in SOE before working behind enemy lines.

It includes everything you needed to know to go undercover - from documents, cover stories and how to live off the land to how to get through an interrogation. The Special Operations Executive (SOE) was a secret British World War II organisation formed in 1940 to conduct espionage, sabotage and reconnaissance in occupied Europe against the Axis powers, and to aid local resistance movements. In late 1942, SOE was asked to increase the number of agents to aid the invasion of mainland Europe.

Part of agent training was `tradecraft' - the practical details on how to be a clandestine agent behind enemy lines - which every agent had to attend at various bases centred around Beaulie in Hampshire. The course was a set of lectures and this book contains the actual text of those lectures which were discovered in the National Archives this year.

It is not only a fascinating insight into the workings of one of the Second World Wars most famous and secretive organisations, but is also a reminder of the huge danger anyone being dropped behind enemy lines had to face. SYLLABUSIntroduction to Course. Individual Security. Informant Service. Cover. Interrogations. Operational Orders. Know your Enemy. Surveillance. Internal Communications. Premises. Security and Premises for W/T Operator. W/T Operator. External Communications. Organisation. Cell System. Security of Organisation. Recruiting. Discipline and Morale. Burglary. Lock-picking. Selection of Dropping Points and Reception Arrangements.

To be given on instructions from London.). Handcuffs. Pigeons. German Counter Espionage. German Uniformed Police. National Police - e.g. of France, Belgium etc. (Given according to student's destination.). The Nazi Party and its Formations in Occupied Territory.

Recognition of German Troops by weapons and equipment. 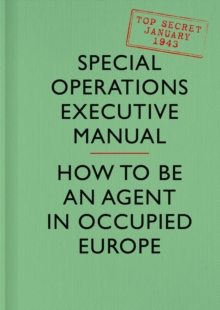