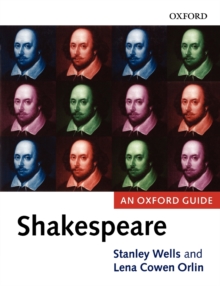 Edited by Stanley Wells and Lena Cowen Orlin, Shakespeare: An Oxford Guide provides a practical and stimulating guide to all aspects of Shakespeare studies.

The volume comprises over 40 specially commissioned essays by an outstanding team of Shakespeare scholars; each essay is written in an accessible and engaging style, and is followed by annotated suggestions for further reading. The volume is divided into four key parts, which as a whole offer a valuable balance of factual and critical content.

In the first Part, chapters provide information about and discuss Shakespeare, the theatres of his time, the society in which he lived, the language of his period, the conventions of playwriting, and his contemporary impact.

The second Part offers critical overviews of Shakespeare's achievement in the principal genres, and each overview is followed by a practical readingexploring Shakespeare's use of the traditions, scope and boundaries of that genre in one of his key works.