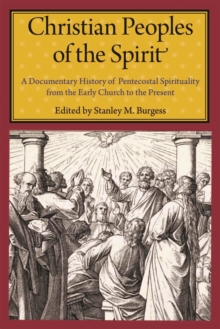 Christian Peoples of the Spirit : A Documentary History of Pentecostal Spirituality from the Early Church to the Present Hardback

Among all groups in Christendom, the Pentecostal/Charismatic movement is second in size only to the Roman Catholic Church, with growth that shows no signs of abatement.

Its adherents declare the Pentecostal Movement, which began at Azusa Street in 1906, to be unprecedented in Christian history since the first century of the Church in its embrace of manifestations of the Holy Spirit such as divine healing, miracles, and speaking in tongues.

Yet although it may be unprecedented in size and rate of growth, Stanley M.

Burgess argues that is hardly unprecedented in concept.

In Christian Peoples of the Spirit, Burgess collects documentary evidence for two thousand years of individuals and groups who have evidenced Pentecostal/charismatic-like spiritual giftings, worship, and experience.

The documents in this collection, bolstered by concise editorial introductions, offer the original writings of a wide variety of "peoples of the spirit," from Tertullian and Antony of the Desert to the Shakers and Sunder Singh, as well as of their enemies or detractors.

Though virtually all of the parties in this volume considered themselves Spirit-gifted, or given special qualities by God, they are in many ways as different from one another as the cultures from which they have emerged.

In providing such an impressive array of voices, Burgess convincingly demonstrates that there have indeed been Spirit-filled worship and charismatic saints in all periods of church history.