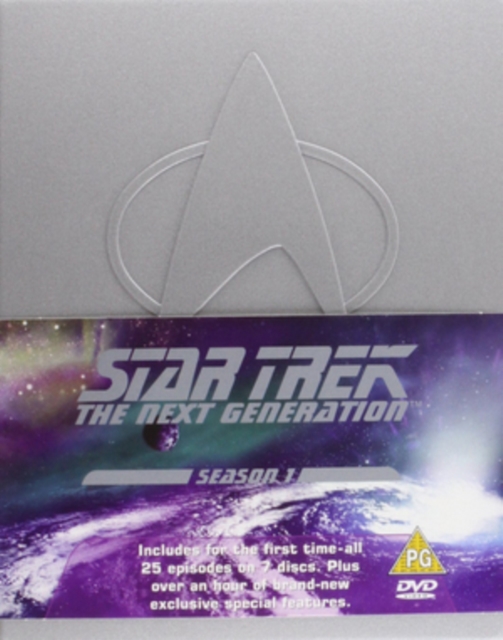 Star Trek the Next Generation: The Complete Season 1 DVD

Entire first series of the popular TV show. In 'Encounter at Farpoint', a double length story, the Enterprise encounters a planet that is being threatened by an alien creature - and to make matters worse, Picard is called before the super-being Q to answer questions on behalf of humanity. 'The Naked Now' has the cew infected by a deadly virus which manifests itself in such symptoms as intoxication and promiscuity. 'Code of Honour' sees Tasha kidnapped by an alien who wants her as his mate. 'The Last Outpost' finds the Enterprise coming face-to-face with the Ferengi for the first time.

In 'Where No One Has Gone Before', a warp experiment goes wrong and flings the Enterprise into a strange galaxy billions of light-years from its starting point. 'Lonely Among Us' has Picard's body becomes the host for an alien entity. 'Justice' sees the unfortunate Wes Crusher sentenced to death for violating a local custom on an alien world. 'The Battle' finds Picard taking on DaiMan Bok, who wants revenge for the death of his son. 'Hide and Q' has the crew of the Enterprise D plagued once more by the cosmic trickster Q. 'Haven' sees Riker's heart set to break when Deanna is forced into an arranged marriage.

In 'The Big Goodbye', Picard indulges his love of film noir detective stories on the holodeck, only to end up trapped when the system malfunctions. 'Datalore' has the crew of the Enterprise discover the component parts of Lore, Data's twin brother, on a devastated planet. 'Angel One' sees Riker caught up in the politics of a planet ruled entirely by women. '11001001' finds the Enterprise hijacked by an alien race called the Bynars, who upgrade the ship's computer to their own ends. 'Too Short a Season' has the Enterprise accompany the ageing Admiral Mark Jameson to Mordan IV, where his mission is to secure the release of Federation hostages. 'When the Bough Breaks' sees Wesley and various other children from the Enterprise kidnapped by the technologically advanced but sterile civilisation on the planet Aldea.

In 'Home Soil', it transpires that the Enterprise is under attack from Microbain, a microscopic life-form, after Data is attacked by a laser drill. 'Coming of Age' finds Wesley preparing to sit an Academy exam, while Picard is investigated by the unpopular Lt Commander Dexter. 'Heart of Glory' has the Enterprise play host to two Klingons who claim to have been attacked by Ferengi. 'The Arsenal of Freedom' sees Picard lead a team to the lifeless planet Minos to search for the USS Drake. 'Symbiosis' finds Picard caught in the middle of a war between the narcotics-addicted Ornarans and their enemies the Brekkans, who possess a possible cure.

In 'Skin of Evil', an Enterprise shuttlecraft crash lands on Vagra II and is captured by the evil Armus. 'We'll Always Have Paris' sees the man married to Picard's first love create a hole in the universe. 'Conspiracy' has Picard's best friend suffer from an acute paranoia which leads to the destruction of his starship being destroyed.

Finally, in 'The Neutral Zone', the crew encounter an enemy stronger than any they have come across before.