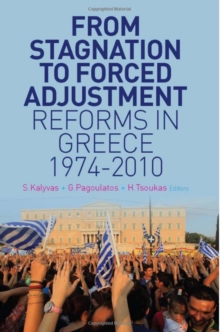 From Stagnation to Forced Adjustment : Reforms in Greece, 1974-2010 Paperback / softback

Ever since Greece's 1974 transition to democracy there has been constant talk of reforms.

Major changes in its economy, society and polity have attempted to bring Greek institutions and policies in line with more developed West European countries.

Some reforms have come to fruition (creation of the NHS, Eurozone entry, banking liberalisation, some privatisations), others have recurred over the years (educational reform), while others have been spasmodic and elusive (pension and civil service reforms).

The Greek malaise, widely felt and discussed in the country, has intensified the need for yet further reforms, yet attempts to introduce them has also fuelled systematic resistance from organised interest groups, which has led to a broadly perceived sense of inertia and stagnation, or at least truncated progress.

This book sets out the background to Greece's current political and economic crisis, examining its three decades of stopstart reforms and their political and institutional consequences.