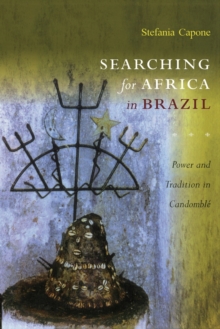 Searching for Africa in Brazil : Power and Tradition in Candomble Paperback / softback

Searching for Africa in Brazil is a learned exploration of tradition and change in Afro-Brazilian religions.

Focusing on the convergence of anthropologists' and religious leaders' exegeses, Stefania Capone argues that twentieth-century anthropological research contributed to the construction of an ideal Afro-Brazilian religious orthodoxy identified with the Nago (Yoruba) cult in the northeastern state of Bahia.

In contrast to other researchers, Capone foregrounds the agency of Candomble leaders.

She demonstrates that they successfully imposed their vision of Candomble on anthropologists, reshaping in their own interest narratives of Afro-Brazilian religious practice.

She does so through an analysis of ritual variations as well as discursive practices.

To illuminate the continuum of Afro-Brazilian religious practice and the tensions between exegetic discourses and ritual practices, Capone focuses on the figure of Exu, the sacred African trickster who allows communication between gods and men.

Following Exu and his avatars, she discloses the centrality of notions of prestige and power-mystical and religious-in Afro-Brazilian religions.

To explain how religious identity is constantly negotiated among social actors, Capone emphasizes the agency of practitioners and their political agendas in the "return to roots," or re-Africanization, movement, an attempt to recover the original purity of a mythical and legitimizing Africa. 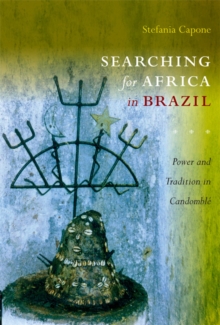 Searching for Africa in Brazil