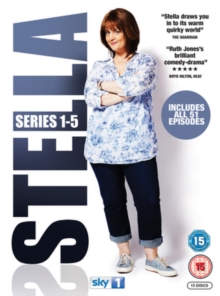 All 51 episodes from the first five series of the British comedy drama set in the fictional Welsh town of Pontyberry written by and starring Ruth Jones.

Series one finds 40-something single mother Stella (Jones) spending her time looking after her children and earning money by ironing for the locals.

Her eldest son, Luke (Craig Gallivan), is soon to be released from prison and she is worried about how he will readjust to life in the community; her daughter, Emma (Catrin Stewart), is dating Sunil (Rory Girvan); while her youngest child, Ben (Justin Davies), is the bright spark of the family but his inquisitiveness can lead him to trouble.

To make matters worse, her ex-husband is dating a beautiful 28-year-old but Stella may have found a love interest of her own in the form of kind-hearted painter and decorator Sean (Kenny Doughty).

In series two, Stella's got more than enough on her plate after discovering that she's pregnant.

To make matters worse, she's not sure if it's Sean's, or if she even really loves him!

Series three sees Stella set out in a new direction, taking up a career in nursing and deciding that the best way to put her complicated love life behind her would be to give up men altogether.

However, for all that her life may seem busy enough with all her children and grandchildren resident at her house, it isn't long before Stella finds herself romantically involved once again.

In series four, Stella continues her romance with neighbour Michael (Patrick Baladi) but problems arise when he decides to run his solicitors' firm from her house.

With her home increasingly cramped, Stella pursues her dream of nursing but encounters more relationship problems when Michael's secrets begin to unravel.

In series five, with Michael working in London, Stella takes on the role of caring for the heavily pregnant Beyoncé (Remy Beasley), but how will Michael react when he finds out?

Meanwhile, Jag (Pal Aron) takes over as landlord of the Frisky Fox, the town hosts its own dance competition, Aunty Brenda is elected the new mayor and Rob (Mark Lewis Jones) returns to Pontyberry with some heartbreaking news.