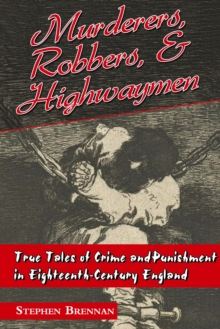 Despite the frequency with which criminals were sentenced to death, crime was still on the rise in England in the mid-1700s.

Men were thrown in jail daily for everything from associating with gypsies to cutting down fruit trees and stealing sheep.

Although these were punishable offenses, the crimes that made headlines in the local papers were much more serious.Men-and sometimes even women-in England were tried and executed every day for their roles in murders, robberies, kidnappings, and more.

This collection features some of the most notorious and slightly disturbing stories of the crimes committed and the subsequent punishments assigned.

Criminals who appear in this book include:Catherine Hayes, burnt alive for the murder of her husbandThomas Lympus, executed for robbing the mailReverend Wheatley, sentenced to public penance for adulteryJohn Everett, sentenced to death for highway robberyFrancis Smith, condemned to death for the murder of a supposed ghostRichard Turpin, executed for horse theftAnd many, many moreMany of these tales were first published in The Newgate Calendar, a popular publication that debuted in multiple volumes between the eighteenth and nineteenth centuries.

Historians believed that every household had a copy of at least one volume of the Calendar, which they stored alongside their copies of the Bible and The Pilgrim's Progress.