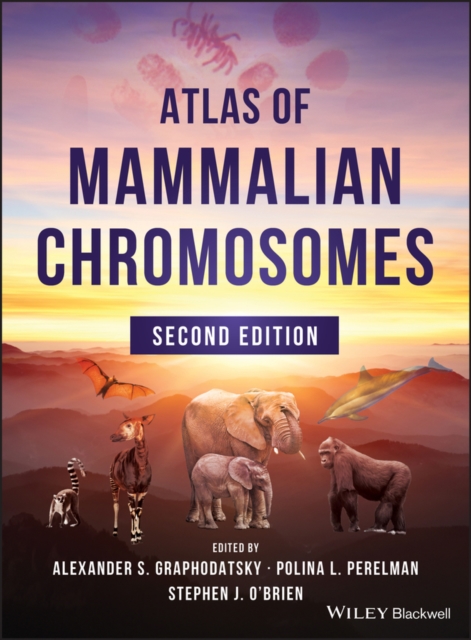 THE UPDATED NEW EDITION OF THE POPULAR COLLECTION OF HIGH-RESOLUTION CHROMOSOME PHOTOGRAPHS FOR GENETICISTS, MAMMOLOGISTS, AND BIOLOGISTS INTERESTED IN COMPARATIVE GENOMICS, SYSTEMATICS, AND CHROMOSOME STRUCTURE Filled with a visually exquisite collection of the banded metaphase chromosome karyotypes from some 1,000 species of mammals, the Atlas of Mammalian Chromosomes offers an unabridged compendium of the state of this genomic art form.

The Atlas??contains the best karyotype produced, the common and Latin name of the species, the published citation, and identifies the contributing authors.

Nearly all karyotypes are G-banded, revealing the chromosomal bar codes of homologous segments among related species.

The Atlas brings together information from a range of cytogenetic literature and features high-quality karyotype images for nearly every mammal studied to date.

When the Atlas was first published, only three mammals were sequenced.

Today, that number is over 300. Now in its second edition, this book contains extensive revisions and major additions such as new karyotypes that employ G- and C- banding to represent euchromatin and heterochromatin genome composition, new phylogenetic trees for each order, homology segment chromosome information on published aligned chromosome painting.

Summaries of the painting data for some species indicate conserved homology segments among compared species.

An invaluable resource for today's comparative genomics era, this comprehensive collection of high-resolution chromosome photographs: Assembles information previously scattered throughout the cytogenetics literature in one comprehensive volumeProvides chromosome information and illustrations for the karyotypes of 300 new speciesAddresses the mandate of the Human Genome Project to annotate the genomes of other organismsServes as a basis for chromosome-level genome assembliesOffers a detailed summation of three decades of ZooFish (chromosome painting)Presents high-resolution photos of karyotypes that represent more than 1,000 mammal species Written for geneticists, mammalogists, and biologists, the Atlas of Mammalian Chromosomes offers a step forward for an understanding of species formation, of genome organization, and of DNA script for natural selection.