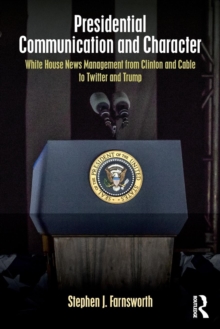 This book traces the evolution of White House news management during America's changing media environment over the past two decades.

Bush, Barack Obama, and Donald Trump, it demonstrates the difficulty that all presidents have in controlling their messages despite a seemingly endless array of new media outlets and the great advantages of the office.

That difficulty is compounded by new media's amplification of presidential character traits for good or ill.

More than ever, presidential character matters, and the media presidents now employ report on the messenger as much as the message. The book also looks at the media strategies of candidates during the 2016 presidential campaign, puts presidential media use in global context, and covers the early phase of the Trump administration, the first true Twitter presidency.