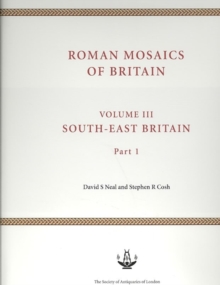 The third volume in this massive project to create the first complete corpus of the Roman mosaics of Britain covers the areas of Britain that were first to come under Roman control and where some of Britain's most impressive mosaics are to be found - in Colchester, Silchester, London and Verulamium, and in villas and palaces at Brading, Bignor, Fishbourne and Rockbourne.

In their introduction to the volume, the authors trace the origins of mosaic-making in Britain, and the development of colour palettes and motifs, from the mainly black-and-white geometric designs of first-century Fishbourne Palace, reflecting contemporary Gaulish fashions, to the more elaborate polychrome designs of the third and fourth centuries, featuring figures from classical mythology, some of which (like Brading's Orpheus taming the animals with his music, or Lullingstone's Bellerophon slaying the Chimera) had been invested with new meaning as symbols of Christianity.

They consider too the types of buildings with which mosaics are associated, the functions of mosaic-decorated rooms, the materials from which they are made, the impact of mosaic discoveries on early antiquaries and the pioneering mosaic paintings of artists such as Richard Smirke and Charles Stothard, published in Samuel Lysons' Reliquae Britanniae Romanae (1817).

The catalogue follows the format of earlier volumes in providing an account of each mosaic's discovery and locating the mosaic within its building plan.

Every mosaic is described, with significant parallels and major references, and illustrated with the authors' own paintings, reproductions of historic engravings and photographs, taken in situ wherever possible, before lifting or restoration.

The result is an unrivalled scholarly resource for anyone interested in Roman art, craftsmanship, architecture and social life, which will shortly be complete with the publication of the fourth and final volume on Western Britain, including Wales.