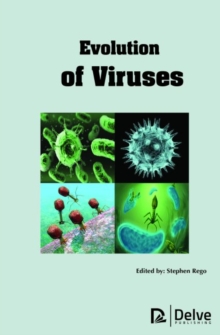 Evolution of virus is a subfield of virology and evolutionary biology, specifically relate to viral evolution.

Rate of mutation at this elevated level permits rapid adaptation to alterations in the host environments, when joined with natural selection.

Evolution of virus is an important part of epidemiology of viral infections, for example, HCV, AIDS, and influenza, etc.

Rapid viral mutations cause difficulties in the progress of effective antiviral drugs and vaccines, such as resistant mutations usually seem from weeks to months after treatment begins.

Major theoretical models, including the quasi-species model, are discussed in detail in this book, as viral quasi-species.

Viruses do not have fossils, as they are very small even smaller than colloidal fragment that forms the sedimentary rocks that fossilize animals and plants.

However, many organisms have genomes and genes of ancient virus that in past invaded in germ line of host.

For example, most of the vertebrates have genomes comprising of hundreds to thousands sequences that are resultant from past retrovirus.

These sequences of are appreciate source of proof retrospective regarding the viral evolutionary history and have originated the paleovirology science. In addition to these, the book describes, modern viral genomic analysis and provide evolutionary history of viruses to some level.

Many viral mutation rates dignified and dates of divergence inferred with the help of application of molecular clock.

The process of evolution in viruses is by changing in sequence of their hereditary materials (DNA and RNA).

Mutants that are best adapted reproduce and divide more quickly than the other ones.

Most of the viruses have ability to interchange their hereditary material during the process when these two different viral strains infect the similar cell.

This mechanism is genetic shift, and is usually the source of more virulent and new appearing strains.

While other viruses develops more slowly due with time accumulation of mutations in their genes through a process of genetic drift.

Due to these processes, the viruses are going to be powerful day by day and presenting as challenge in efforts of controlling disease.

Just like as natural selection has molded evolution of all living things, humans and plants on the world, this process produce developments in viruses.

Viruses are not living things technically; however, they require a host organism to reproduce.

Its job is to attack the immune system, to create its copies and spread in its host.

If virus killed the host before affecting other one, it will lose its mutation. This book discusses viral cycles in a host and host immune responses to viruses including the development of antibodies.

These antibodies lock on the proteins present on outer surface of viruses.

These antibodies protect the host from viral entrance.

The virus that is different from other types of viruses has an advantage, as the host body has no immunity against that new virus in antibody form.

Evolutionary history of viruses is not understood completely.

Few might have evolved from bacteria and others from pieces of DNA or plasmids that can transfer among the cells.

For example, retrovirus has ability to move among cells.

During the cycle of retrovirus, the viral genes could transcribed or translated.

RNA polymerase has the capacity to make new copies of single stranded RNA genome of virus.

These movable genetic materials make about 45 % of human genome and can move within it with the help of RNA intermediates.

It is included in the progressive hypotheses. The book also includes evolution of quasi-species; Quasi-species of viruses related through alike mutations or by mutations that are competing in highly mutagenic surroundings.

The hypothesis predicts that a viral quasi-species at a low yet developmentally impartial and profoundly associated (that is, level) area in the wellness scene will outcompete a quasi-species situated at a higher yet smaller wellness top in which the encompassing mutants are unfit.

This marvel is known as `the quasi-species impact' or, currently, the `survival of the flattest'.

The centrality of the quasi-species demonstrate for virology is that, if the transformation rate is adequately high, choice follows up on mutants instead of individual sequences.

Therefore, the developmental direction of the infections related to a virus cannot anticipated exclusively from the qualities of the fittest succession.

Information about evolution of plant viruses is also discussedViruses cause major threats to all living life forms including plants, including catastrophic damage to production of crops.

Viruses of plants use various processes to make the huge quantity of hereditary diversity present in both among and inside the species.

Plant viruses may have processes of highly prone replication, which cause several mutations.

By nature, it is quasi-species. The evolution of plant viruses usually use the process of re-assortment and recombination.

Different species of plant viruses have different quantity of differences; however, there is no proof of changes in mutation rate.

Plant and animal viruses have common origin. It is recommended reading for individuals who seek further information regarding viral evolution.