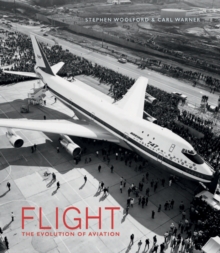 Flight : The Evolution of Aviation Hardback

Witness the daring exploits and dangerous challenges that form the story of flight in this beautifully illustrated book, filled with rare photographs and historical documents.

Celebrating 50 years since the first flight of the Boeing 747 and of Concorde, it describes the early pioneers, such as the Wright brothers and Alcock & Brown, as well as the highly skilled engineers developing aircraft today.

From the early hot-air balloons of the Montgolfiers to the complex technology behind military jets and space rockets, Flight looks at how air power emerged as a new means of military combat and how it became the leading mode of international travel, all in the space of less than a century.