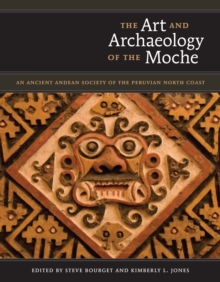 The Art and Archaeology of the Moche : An Ancient Andean Society of the Peruvian North Coast Hardback

Renowned for their monumental architecture and rich visual culture, the Moche inhabited the north coast of Peru during the Early Intermediate Period (AD 100-800).

Archaeological discoveries over the past century and the dissemination of Moche artifacts to museums around the world have given rise to a widespread and continually increasing fascination with this complex culture, which expressed its beliefs about the human and supernatural worlds through finely crafted ceramic and metal objects of striking realism and visual sophistication. In this standard-setting work, an international, multidisciplinary team of scholars who are at the forefront of Moche research present a state-of-the-art overview of Moche culture.

The contributors address various issues of Moche society, religion, and material culture based on multiple lines of evidence and methodologies, including iconographic studies, archaeological investigations, and forensic analyses.

Some of the articles present the results of long-term studies of major issues in Moche iconography, while others focus on more specifically defined topics such as site studies, the influence of El Nino/Southern Oscillation on Moche society, the nature of Moche warfare and sacrifice, and the role of Moche visual culture in decoding social and political frameworks.