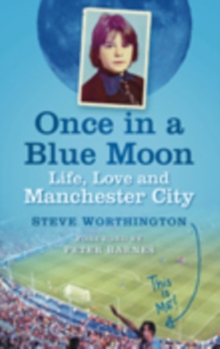 Once in a Blue Moon : Life, Love and Manchester City Paperback / softback

Once in a Blue Moon is the story of one man's never-ending affair with Manchester City. Be it playing, watching or managing, Steve 'Worthy' Worthington's life in football has never been easy.

Having suffered an almost fatal road accident in the week before his ninth birthday, any aspirations for glocal stardom as a player were crushed beneath the wheels of a speeding Triumph Spitfire in 1971.

As a spectator he fared no better. Over the years Manchester City and England addicts have experienced many disappointments - most of which he was there to see.

As manager of his beloved Sunday League club Lee Athletic, success was a word used only on the odd occasion when he persuaded his team to turn up sober and in time for kick-off.

But two things that have always kept him going were his love of the local 'Indie' music scene and an ability to find humour during the darkest of times. Join him n a vivid journey that takes you into the beating heart of 1960s and '70s working class Manchester: through give decades of football (and a bit of cricket), music and people, in the eyes and ears of an everyday bloke who turned constant failure into final triumph.