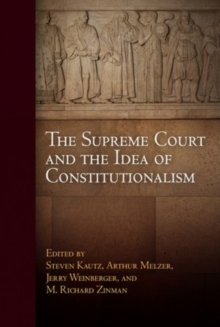 The Supreme Court and the Idea of Constitutionalism Hardback

From Brown v. Board of Education to Roe v. Wade to Bush v. Gore, the Supreme Court has, over the past fifty years, assumed an increasingly controversial place in American national political life.

As the recurring struggles over nominations to the Court illustrate, few questions today divide our political community more profoundly than those concerning the Court's proper role as protector of liberties and guardian of the Constitution.

If the nation is today in the midst of a "culture war," the contest over the Supreme Court is certainly one of its principal battlefields. In this volume, distinguished constitutional scholars aim to move debate beyond the sound bites that divide the opposing parties to more fundamental discussions about the nature of constitutionalism.

Although the volume represents a variety of viewpoints and approaches, this struggle, which is the central paradox of constitutionalism, is the ultimate theme of all the essays.