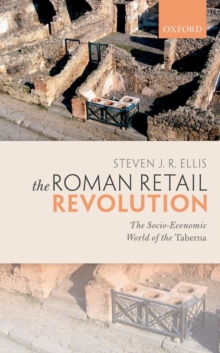 The Roman Retail Revolution : The Socio-Economic World of the Taberna Hardback

Tabernae were ubiquitous in all Roman cities, lining the busiest streets and dominating their most crowded intersections in numbers far exceeding those of any other form of building.

That they played a vital role in the operation of the city, and indeed in the very definition of urbanization in ancient Rome, is a point too often under-appreciated in Roman studies, and one which bears fruitful further exploration.

The Roman Retail Revolution offers a thorough investigation into the social and economic worlds of the Roman shop, focusing on food and drink outlets in particular.

Combining critical analysis of both archaeological material and textual sources, it challenges many of the conventional ideas about the place of retailing in the Roman city and unravels the historical development of tabernae to identify three major waves or revolutions in the shaping of retail landscapes. The volume is underpinned by two new and important bodies of evidence: the first generated from the University of Cincinnati's recent archaeological excavations into a Pompeian neighborhood of close to twenty shop-fronts, and the second resulting from a field-survey of the retail landscapes of more than a hundred cities fromacross the Roman world.

The richness of this information, combined with the volume's interdisciplinary approach to the lives of the Roman sub-elite, results in a refreshingly original look at the history of retailing and urbanism in the Roman world.