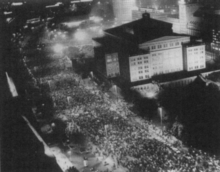 Exit-Voice Dynamics and the Collapse of East Germany : The Crisis of Leninism and the Revolution of 1989 Hardback

Winner of the Social Science History Association President's Book AwardEast Germany was the first domino to fall when the Soviet bloc began to collapse in 1989.

Its topple was so swift and unusual that it caught many area specialists and social scientists off guard; they failed to recognize the instability of the Communist regime, much less its fatal vulnerability to popular revolt.

In this volume, Steven Pfaff identifies the central mechanisms that propelled the extraordinary and surprisingly bloodless revolution within the German Democratic Republic (GDR).

By developing a theory of how exit-voice dynamics affect collective action, Pfaff illuminates the processes that spurred mass demonstrations in the GDR, led to a peaceful surrender of power by the hard-line Leninist elite, and hastened German reunification.

While most social scientific explanations of collective action posit that the option for citizens to emigrate-or exit-suppresses the organized voice of collective public protest by providing a lower-cost alternative to resistance, Pfaff argues that a different dynamic unfolded in East Germany.

The mass exit of many citizens provided a focal point for protesters, igniting the insurgent voice of the revolution. Pfaff mines state and party records, police reports, samizdat, Church documents, and dissident manifestoes for his in-depth analysis not only of the genesis of local protest but also of the broader patterns of exit and voice across the entire GDR.

Throughout his inquiry, Pfaff compares the East German rebellion with events occurring during the same period in other communist states, particularly Czechoslovakia, China, Poland, and Hungary.

He suggests that a trigger from outside the political system-such as exit-is necessary to initiate popular mobilization against regimes with tightly centralized power and coercive surveillance. 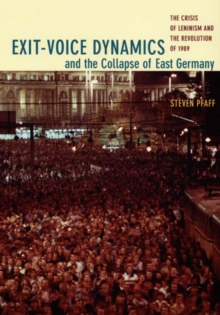 Exit-Voice Dynamics and the Collapse of...