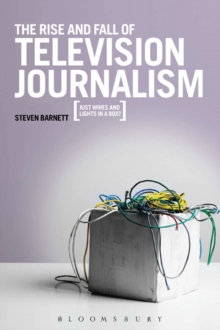 The Rise and Fall of Television Journalism : Just Wires and Lights in a Box? Paperback / softback

This book traces the history of television journalism in Britain from its austere roots in the BBC's post-war monopoly to the present-day plethora of 24 hour channels and celebrity presenters.

It asks why a medium whose thirst for pictures, personalities and drama makes it, some believe, intrinsically unsuitable for serious journalism should remain in the internet age the most influential purveyor of news. Barnett compares the two very different trajectories of television journalism in Britain and the US, arguing that from the outset a rigorous statutory and regulatory framework rooted in a belief about the democratic value of the medium created and sustained a culture of serious, responsible, accurate and interrogative journalism in British television.

The book's overarching thesis is that, despite a very different set of historical, regulatory and institutional practices, there is a very real danger that Britain is now heading down the same road as America.