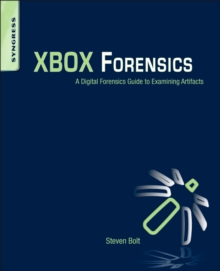 by Steven (is a Computer Forensics Leader, and Instructor at the Defence Cyber Investigations Tra Bolt

XBOX 360 Forensics is a complete investigation guide for the XBOX game console. Because the XBOX 360 is no longer just a video game console - it streams movies, connects with social networking sites and chatrooms, transfer files, and more - it just may contain evidence to assist in your next criminal investigation.

The digital forensics community has already begun to receive game consoles for examination, but there is currently no map for you to follow as there may be with other digital media.

XBOX 360 Forensics provides that map and presents the information in an easy-to-read, easy-to-reference format. This book is organized into 11 chapters that cover topics such as Xbox 360 hardware; XBOX LIVE; configuration of the console; initial forensic acquisition and examination; specific file types for Xbox 360; Xbox 360 hard drive; post-system update drive artifacts; and XBOX Live redemption code and Facebook. This book will appeal to computer forensic and incident response professionals, including those in federal government, commercial/private sector contractors, and consultants.