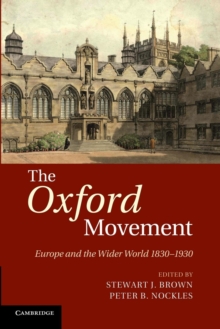 The Oxford Movement : Europe and the Wider World 1830-1930 Paperback / softback

The Oxford Movement transformed the nineteenth-century Church of England with a renewed conception of itself as a spiritual body.

Initiated in the early 1830s by members of the University of Oxford, it was a response to threats to the established Church posed by British Dissenters, Irish Catholics, Whig and Radical politicians, and the predominant evangelical ethos - what Newman called 'the religion of the day'.

The Tractarians believed they were not simply addressing difficulties within their national Church, but recovering universal principles of the Christian faith.

To what extent were their beliefs and ideals communicated globally?

Was missionary activity the product of the movement's distinctive principles?

Did their understanding of the Church promote, or inhibit, closer relations among the churches of the global Anglican Communion?

This volume addresses these questions and more with a series of case studies involving Europe and the English-speaking world during the first century of the Movement.