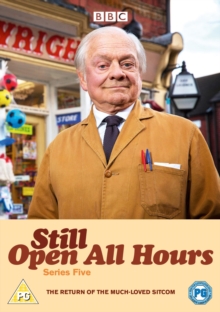 All six episodes from the fifth series and the Christmas special of the BBC comedy with David Jason reprising his role as Granville from the classic sitcom 'Open All Hours'.

After inheriting the family corner shop from his deceased uncle Arkwright, Granville (Jason) returns to run the business with his son Leroy (James Baxter).

The former shop assistant maintains his uncle's frugality as he craftily tries to shift stock to the local customers while also pondering expanding his existing enterprise.

In this instalment, Granville employs an unusual strategy to sell baked beans, starts making his own sausages and works on improving his advertising.

Meanwhile, Eric and Cyril (Johnny Vegas and Kulvinder Ghir) take up rock climbing before getting back on their bikes and Beth (Katie Redford) tries to persuade Leroy to arrange a blind date for her friend.