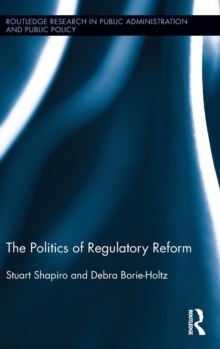 The Politics of Regulatory Reform Hardback

Regulation has become a front-page topic recently, often referenced by politicians in conjunction with the current state of the U.S. economy. Yet despite regulation's increased presence in current politics and media, The Politics of Regulatory Reform argues that the regulatory process and its influence on the economy is misunderstood by the general public as well as by many politicians. In this book, two experienced regulation scholars confront questions relevant to both academic scholars and those with a general interest in ascertaining the effects and importance of regulation.

How does regulation impact the economy? What roles do politicians play in making regulatory decisions?

Why do politicians enact laws that require regulations and then try to hamper agencies abilities to issue those same regulations?

The authors answer these questions and untangle the misperceptions behind regulation by using an area of regulatory policy that has been underutilized until now.

Rather than focusing on the federal government, Shapiro and Borie-Holtz have gathered a unique dataset on the regulatory process and output in the United States.

They use state-specific data from twenty-eight states, as well as a series of case studies on regulatory reform, to question widespread impressions and ideas about the regulatory process. The result is an incisive and comprehensive study of the relationship between politics and regulation that also encompasses the effects of regulation and the reasons why regulatory reforms are enacted.