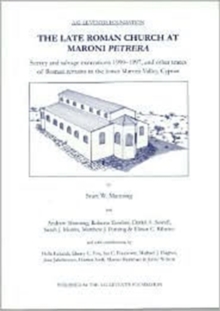 A report on survey work and salvage excavations, 1990-1997, undertaken at the Late Roman church of Maroni Petrera located in the Lower Maroni Valley in southern Cyprus and first established in the mid-5th century.

Within the remit of the work of the Maroni Valley Archaeological Survey Project the remains of this semi-bulldozed site were recorded, the wider area surveyed and the finds studied.

This report includes details on the survey work, the stratigraphic excavations and the finds including ceramics, tiles (many with embossed decoration), worked stone and building materials, metal and glass fragments, coins and other features such as burials and a cistern.

A more general discussion of the development of the church, its role within the Maroni Valley and comparisons with contemporary sites elsewhere on the island, is also included.