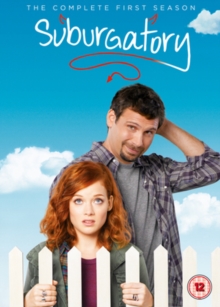 All episodes from the first season of the US comedy following teenager Tessa Altman (Jane Levy) and her dad George (Jeremy Sisto) as they go about their lives in the seemingly perfect fictional town of Chatswin.

After making an unsettling discovery in Tessa's room, architect George jumps to conclusions and decides to move with his daughter from New York City to the suburbs.

Tessa is unhappy about the change, however, and finds herself out of place in her new surroundings.

The episodes comprise: 'Pilot', 'The Barbecue', 'The Chatterer', 'Don't Call Me Shirley', 'Halloween', 'Charity Case', 'Sweet Sixteen', 'Thanksgiving', 'The Nutcracker', 'Driving Miss Dalia', 'Out in the Burbs', 'The Casino Trip', 'Sex and the Suburbs', 'The Body', 'Fire With Fire', 'Poetic Injustice', 'Independence Day', 'Down Time', 'Entering Eden', 'Hear No Evil', 'The Great Compromise' and 'The Motherload'.