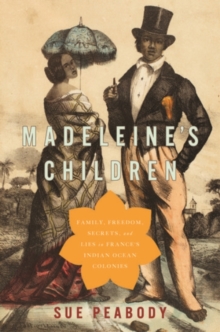 In 1759 a baby girl was born to an impoverished family on the Indian subcontinent.

Her parents pawned her into bondage as a way to survive famine.

A Portuguese slaver sold the girl to a pious French spinster in Bengal, where she was baptized as Madeleine.

Eventually she was taken to France by way of Ile de France (Mauritius), and from there to Ile Bourbon (Reunion), where she worked on the plantation of the Routier family and gave birth to three children: Maurice,Constance, and Furcy.

Following the master's death in 1787, Madame Routier registered Madeleine's manumission, making her free on paper and thus exempting the Routiers from paying the annual head tax on slaves.

However, according to Madeleine's children, she was never told that she was free.

Shecontinued to serve the widow Routier for another nineteen years, through the Revolution, France's general emancipation of 1794 (which the colonists of the Indian Ocean successfully repelled), the Napoleonic restoration of slavery, and British occupation of France's Indian Ocean colonies.

Not until the widow Routier died in 1808 did Madeleine learn of her freedom and that the Routier estate owed her nineteen years of back wages.

Madeleine tried to use the Routiers' debt to negotiate for her sonFurcy's freedom from Joseph Lory, the Routiers' son-in-law and heir, but Lory tricked the illiterate Madeleine into signing papers that, in essence, consigned Furcy to Lory as his slave for life. While Lory invested in slave smuggling and helped introduce sugar cultivation to Ile Bourbon, Furcy spent the next quarter century trying to obtain legal recognition of his free status as he moved from French Ile Bourbon to British Mauritius and then to Paris.

His legal actions produced hundreds of pages that permit reconstruction of the lives of Furcy and his family in astonishing detail.

Eight rare extant letters signed by Furcy over two decades tell in his own words how he understood his enslavement and freedom within these multiple legal jurisdictions and societies.

France's general emancipation of 1848 erased the distinction between slavery and freedom for all former slaves butthe reaction of 1851 excluded them from citizenship.

The struggle for justice, respect, and equality for former slaves and their descendants would not be realized within Furcy's lifetime. The life stories of Madeleine and her three children are especially precious because, unlike scores of slave narratives published in the United States and England in the eighteenth and nineteenth centuries, no autobiographical narrative of a slave held by French-published or unpublished-exists.

This will be one of only a handful of modern biographies of enslaved people within France's empire, in French or in English, and the only one to explore transformations in slavery and freedom in Frenchcolonies of the Indian Ocean.

This story is also significant because of the legal arguments advanced in Furcy's freedom suits between 1817 and 1843.

Furcy's lawyers argued that he was free by race (as the descendent of an Indian rather than an African mother) and also by Free Soil (the legal principlewhereby any slave setting foot on French soil thereby became free, since Madeleine resided in France before Furcy was born).

Parallel debates surround the American case of Dred Scott, who began his long and unsuccessful bid for freedom in 1846 in the former French colonial city of St.

However, the French ruling that Furcy was free by Free Soil and the rejection of the racialargument offer a historical counterpoint to the infamous Taney opinion of 1857. The gripping story of Madeleine and her children is especially well-suited to exploring the developments of French colonization, plantation slavery, race, sugar cultivation, and abolitionism. A fluid narrative, it should have appeal for readers of the history of slavery, world history, Indian Ocean history, and French colonial history.