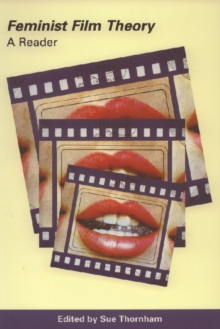 This anthology brings together the key statements from the main debates in feminist film theory in Britain and the United States since 1970.

The book maps the impact of major theoretical developments - structuralist and semiotic theory; psychoanalysis; theories of ideology, language and discourse - on this growing field, in terms of both theoretical shifts and changes in methodologies.

For the past twenty-five years, cinema has been a vital terrain on which feminist debates about culture, representation and identity have been fought.

This anthology seeks to chart the history of those debates, bringing together the key statements in feminist film theory in Britain and the United States since 1970. The book maps the impact of major theoretical developments in this growing field - from structuralism and psychoanalysis to post-colonial theory, queer theory and postmodernism in the 1990s - interms of both theoretical shifts and changes in methodologies. Organised into six sections, the readings deal with a wide range of topics: oppressive images; "woman" as fetishised object of desire; female spectatorship; film audiences; issues of fantasy and desire in popular film; and the cinematic pleasures of black women and lesbian women.

The centrality of a feminist "politics of vision" unites all the readings in this book.

Key Features *Divided into six sections for ease of use: Taking up the Struggle; The Language of Theory; The Female Spectator; Textual Negotiations; Fantasy, Horror and the Body; Re-Thinking Differences *An introduction setting out the key debates in feminist film theory *Introductions to each section