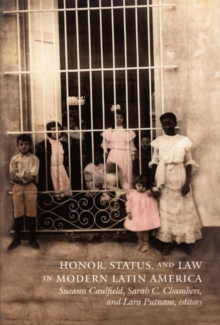 This collection brings together recent scholarship that examines how understandings of honor changed in Latin America between political independence in the early nineteenth century and the rise of nationalist challenges to liberalism in the 1930s.

These rich historical case studies reveal the uneven processes through which ideas of honor and status came to depend more on achievements such as education and employment and less on the birthright privileges that were the mainstays of honor during the colonial period.

Whether considering court battles over lost virginity or police conflicts with prostitutes, vagrants, and the poor over public decorum, the contributors illuminate shifting ideas about public and private spheres, changing conceptions of race, the growing intervention of the state in defining and arbitrating individual reputations, and the enduring role of patriarchy in apportioning both honor and legal rights.Each essay examines honor in the context of specific historical processes, including early republican nation-building in Peru; the transformation in Mexican villages of the cargo system, by which men rose in rank through service to the community; the abolition of slavery in Rio de Janeiro; the growth of local commerce and shifts in women's status in highland Bolivia; the formation of a multiethnic society on Costa Rica's Caribbean coast; and the development of nationalist cultural responses to U.S. colonialism in Puerto Rico. By connecting liberal projects that aimed to modernize law and society with popular understandings of honor and status, this volume sheds new light on broad changes and continuities in Latin America over the course of the long nineteenth century. Contributors. Jose Amador de Jesus, Rossana Barragan, Sueann Caulfield, Sidney Chalhoub, Sarah C.