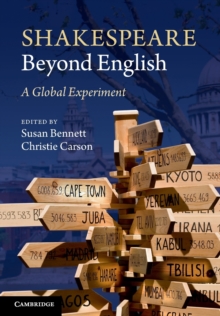 Tackling vital issues of politics, identity and experience in performance, this book asks what Shakespeare's plays mean when extended beyond the English language.

From April to June 2012 the Globe to Globe Festival offered the unprecedented opportunity to see all of Shakespeare's plays performed in many different world languages.

Thirty-eight productions from around the globe were presented in six weeks as part of the World Shakespeare Festival, which formed a cornerstone of the Cultural Olympics.

This book provides the only complete critical record of that event, drawing together an internationally renowned group of scholars of Shakespeare and world theatre with a selection of the UK's most celebrated Shakespearean actors.

Featuring a foreword by Artistic Director Dominic Dromgoole and an interview with the Festival Director Tom Bird, this volume highlights the energy and dedication that was necessary to mount this extraordinary cultural experiment.