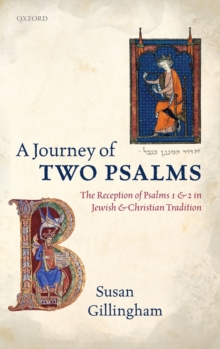 A Journey of Two Psalms : The Reception of Psalms 1 and 2 in Jewish and Christian Tradition Hardback

For two-and-a-half millennia these two psalms have been commented on, translated, painted, set to music, employed in worship, and adapted in literature, often being used disputatiously by Jews and Christians alike. Psalm 1 is about the Law; at the heart of Psalm 2 is the Anointed One ('Messiah'), and together they serve as a Prologue to the rest of the Psalter.

They have frequently been read as one composite poem, with the Temple as one of the motifs unitingthem. So three themes-Jewish and Christian disputes, the interrelationship of these psalms, and the Temple-are interwoven throughout this reception history analysis.

The journey starts in ancient Judaism, moves on to early Christianity, then to rabbinic and medieval Judaism, and so to Christiancommentators from the early Middle Ages to the Reformation. The journey pauses to look at four important modes of reception-liturgical use, visual exegesis, musical interpretation, and imitation in English literature.

Thirty-eight colour plates and numerous musical and poetic examples bring the work to life. The journey continues by looking at the debates about these psalms which have occupied scholars since the Enlightenment, and ends with a chapter which surveys their reception historyin the light of the three key themes.