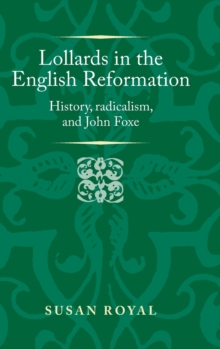 This book examines the afterlife of the lollard movement, demonstrating how it was shaped and used by evangelicals and seventeenth-century Protestants.

It focuses on the work of John Foxe, whose influential Acts and Monuments (1563) reoriented the lollards from heretics and traitors to martyrs and model subjects, portraying them as Protestants' ideological forebears.

It is a scholarly mainstay that Foxe edited radical lollard views to bring them in line with a mainstream monarchical church.

But this book offers a strong corrective to the argument, revealing that the subversive material present in Foxe's text allowed seventeenth-century religious radicals to appropriate the lollards as historical validation of their own theological and political positions.

The book argues that the same lollards who were used to strengthen the English church in the sixteenth century would play a role in its fragmentation in the seventeenth. -- .