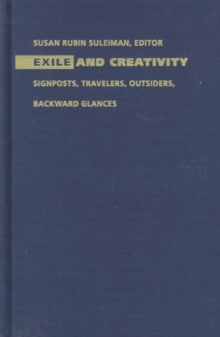 A major historical phenomenon of our century, exile has been a focal point for reflections about individual and cultural identity and problems of nationalism, racism, and war.

Whether emigres, exiles, expatriates, refugees, or nomads, these people all experience a distance from their homes and often their native languages.

Exile and Creativity brings together the widely varied perspectives of nineteen distinguished European and American scholars and cultural critics to ask: Is exile a falling away from a source of creativity associated with the wholeness of home and one's own language, or is it a spur to creativity?In essays that range chronologically from the Renaissance to the 1990s, geographically from the Danube to the Andes, and historically from the Inquisition to the Holocaust, the complexities and tensions of exile and the diversity of its experiences are examined.

Recognizing exile as an interior experience as much as a physical displacement, this collection discusses such varied topics as intellectual exile and seventeenth-century French literature; different versions of home and of the novel in the writings of Bakhtin and Lukacs; the displacement of James Joyce and Clarice Lispector; a young journalist's meeting with James Baldwin in the south of France; Jean Renoir's Hollywood years; and reflections by the descendents of European emigres.

Strikingly, many of the essays are themselves the work of exiles, bearing out once more the power of the personal voice in scholarship. With the exception of the contribution by Henry Louis Gates Jr., these essays were originally published in a special double issue of Poetics Today in 1996.

Exile and Creativity will engage a range of readers from those whose specific interests include the problems of displacement and diaspora and the European Holocaust to those whose broad interests include art, literary and cultural studies, history, film, and the nature of human creativity.Contributors.