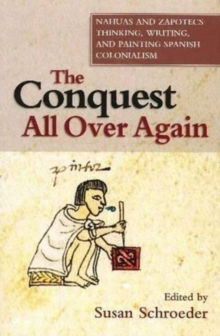 The Spaniards typically portrayed the conquest and fall of Mexico Tenochtitlan as Armageddon, while native peoples in colonial Mesoamerica continued to write and paint their histories and lives often without any mention of the foreigners in their midst.

Thousand of documents were produced, almost all of which served to preserve indigenous ways of doing things.

But what provoked record keeping on such a grand scale?

At what point did pre-contact sacred writing become utilitarian and quotidian?

Were their texts documentaries, a form of boosterism, even ingenious intellectualism, or were they ultimately a literature of ruin?

This volume seeks to address key aspects of indigenous perspectives of the conquest and Spanish colonialism by examining what they themselves recorded and why they did so.