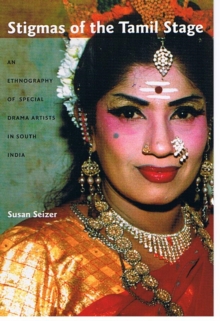 Stigmas of the Tamil Stage : An Ethnography of Special Drama Artists in South India Hardback

A study of the lives of popular theater artists, Stigmas of the Tamil Stage is the first in-depth analysis of Special Drama, a genre of performance unique to the southernmost Indian state of Tamilnadu.

Held in towns and villages throughout the region, Special Drama performances last from 10 p.m. until dawn. There are no theatrical troupes in Special Drama; individual artists are contracted "specially" for each event.

The first two hours of each performance are filled with the kind of bawdy, improvisational comedy that is the primary focus of this study; the remaining hours present more markedly staid dramatic treatments of myth and history.

Special Drama artists themselves are of all ages, castes, and ethnic and religious affiliations; the one common denominator in their lives is their lower-class status.

Artists regularly speak of how poverty compelled their entrance into the field. Special Drama is looked down upon by the middle- and upper-classes as too popular, too vulgar, and too "mixed." The artists are stigmatized: people insult them in public and landlords refuse to rent to them.

Stigma falls most heavily, however, on actresses, who are marked as "public women" by their participation in Special Drama.

As Susan Seizer's sensitive study shows, one of the primary ways the performers deal with such stigma is through humor and linguistic play.

Their comedic performances in particular directly address questions of class, culture, and gender deviations-the very issues that so stigmatize them.

Seizer draws on extensive interviews with performers, sponsors, audience members, and drama agents as well as on careful readings of live Special Drama performances in considering the complexities of performers' lives both on stage and off. 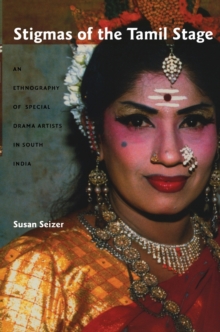 Stigmas of the Tamil Stage