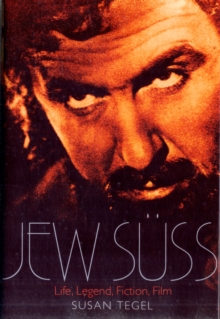 The Jew Suss : His Life and Afterlife in Legend, Literature and Film Hardback

This is an in-depth study of how this notorious figure has captured the public imagination, in both life and legend.

For two centuries the image of Jew Suss has been adapted, distorted and transformed by writers and film directors.

In telling the story of those various transformations and the reasons for them, this book paints a broad picture of German history and, in some cases, antisemitism.

Joseph Suss Oppenheimer (1698-1738), better know as Jew Suss, was a Court Jew who served as financial advisor to the Duke of Wurttemberg.

Clever and handsome, he adapted easily to court life despite his humble origins.

He made many enemies - primarily for his unpopular economic policies - and on the Duke's sudden death he was arrested and charged with high treason and abuse of office.

Found guilty, he was executed in Stuttgart in an iron cage suspended above a gallows.

It captured the public imagination then and in subsequent centuries, finally serving as a parable for the Final Solution and the most notorious of Nazi antisemitic films, Veit Harlan's "Jud Suss" (1940).