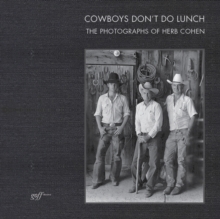 Cowboys Don't Do Lunch: The Photographs of Herb Cohen Hardback

This book features skillfully detailed photographs of the last of the real cowboys of Cave Creek, Arizona from when the area was in transition from a full-time cattle ranching community to an incorporated town.

Despite the rapid modernization of life in the 20th Century, through the 1970s the inhabitants of this community remained relatively unchanged in their mannerisms and way of life.

Herb Cohen was invited by the cowboys he photographed to be a participant in their lives.

In addition, he also was equally welcomed into families on the Navajo Reservation.

Based on these connections Cohen captured images few had access to at the time.

His photos reveal the historical and cultural significance of the people that settled these regions.