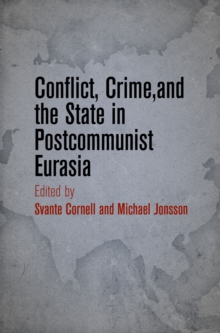 Conflict, Crime, and the State in Postcommunist Eurasia Hardback

In the years after the collapse of the Soviet Union and its zone of influence, few insurgent groups had the resources necessary to confront regular armies.

The pressing need to raise funds for war and the weakness of law enforcement in conflict zones create fertile conditions for organized crime; indeed, there is a mounting body of evidence correlating armed conflict and illicit economy, though the nature of this link and its impact on regional politics has not been well understood. Conflict, Crime, and the State in Postcommunist Eurasia explores the relationship between ideologically motivated insurgents, profit-motivated crime, and state institutions in eight conflict zones.

Through detailed case studies, the contributors demonstrate how the operations and incentives of insurgents may emerge and shift over time: for some armed groups, crime can become an end in itself beyond a financial means, but not all armed groups equally adapt to illicit commerce.

They also show how the criminalization of state institutions is a lingering concerns even after armed conflicts end.

Conflict, Crime, and the State in Postcommunist Eurasia places the case studies along a continuum of political and criminal behavior, examining the factors that motivate insurgents to seek out criminal alliance, how this connection affects the dynamics of conflict, and what risks remain during postconflict transition.