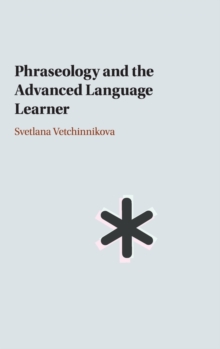 by Svetlana (University of Helsinki) Vetchinnikova

Phraseology is often thought of as an anomaly and a headache for language learners.

However, researchers have tended to focus on just one end of the scale: fairly fixed, conventional multi-word units.

Here their special status and any divergence from the standard form are clearly evident.

What happens at the other end of the scale? How much and what kind of variability does phraseological patterning tolerate?

This important study develops a unified view on phraseological patterning in second language acquisition and use and the processes which lead to it.