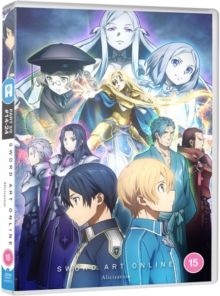 Episodes 14-24 of the Japanese anime based on the light novel series by Reki Kawahara about a group of gamers competing in an immersive virtual world that has consequences in the real world.

When Kirito (voice of Yoshitsugu Matsuoka) finds himself in the Underworld he cannot recall how he got there and when he meets with best friend Eugeo (Nobunaga Shimazaki) the pair have no memory of ever having known one another.

Meanwhile, the motives behind the construction of a more advanced virtual reality may have more sinister origins than first thought.

The episodes are: 'The Crimson Knight', 'The Relentless Knight', 'The Osmanthus Knight', 'Truce', 'The Legendary Hero', 'The Seal of the Right Eye', 'Synthesis', 'The 32nd Knight', 'Titan of the Sword', 'Administrator' and 'My Hero'.