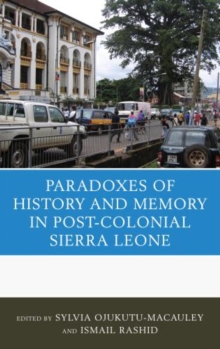 The Paradoxes of History and Memory in Postcolonial Sierra Leone Hardback

This anthology reflects the complex processes in the production of historical knowledge and memory about Sierra Leone and its diaspora since the 1960s.

The processes, while emblematic of experiences in other parts of Africa, contain their own distinctive features.

The fragments of these memories are etched in the psyche, bodies, and practices of Africans in Africa and other global landscapes; and, on the other hand, are embedded in the various discourses and historical narratives about the continent and its peoples.

Even though Africans have reframed these discourses and narratives to reclaim and re-center their own worldviews, agency, and experiences since independence they remained, until recently, heavily sedimented with Western colonialist and racialist ideas and frameworks.

This anthology engages and interrogates the differing frameworks that have informed the different practices-professional as well as popular-of retelling the Sierra Leonean past.

In a sense, therefore, it is concerned with the familiar outline of the story of the making and unmaking of an African "nation" and its constituent race, ethnic, class, and cultural fragments from colonialism to the present.

Yet, Sierra Leone, the oldest and quintessential British colony and most Pan-African country in the continent, provides interesting twists to this familiar outline.

The contributors to this volume, who consist of different generations of very accomplished and prominent scholars of Sierra Leone in Africa, the United States, and Europe, provide their own distinctive reflections on these twists based on their research interests which cover ethnicity, class, gender, identity formation, nation building, resistance, and social conflict.

They also reflect the changing modes of historical practice and perspectives over the last fifty years of independence.