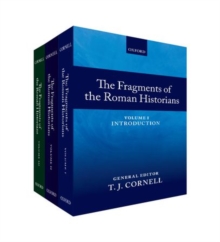 The Fragments of the Roman Historians Multiple copy pack

The Fragments of the Roman Historians is a definitive and comprehensive edition of the fragmentary texts of all the Roman historians whose works are lost.

Historical writing was an important part of the literary culture of ancient Rome, and its best-known exponents, including Sallust, Livy, Tacitus, and Suetonius, provide much of our knowledge of Roman history.

However, these authors constitute only a small minority of the Romans who wrote historical worksfrom around 200 BC to AD 250.

In this period we know of more than 100 writers of history, biography, and memoirs whose works no longer survive for us to read.

They include well-known figures such as Cato the Elder, Sulla, Cicero, and the emperors Augustus, Tiberius, Claudius, Hadrian, and Septimius Severus.

Beginning with a detailed introduction explaining the history of scholarly research on the subject, the principles and methods used in editing the fragmentary texts, the literary style of the historians, and a surevy of the secondary texts that cite and preserve the fragments of the lost works, these three volumes bring together everything that is known about these historians and their works.

Volume one provides an introduction to each historian, outlining what is known of their life and works. Volume two sets out the critical text with facing English translation, and volume three offers a detailed and up-to-date commentary on each of the historical fragments.

Undertaken as a collaborative research project by a team of ten UK-based scholars, this work will become an important and standard text for anyone working on the Roman historians and ancient history.