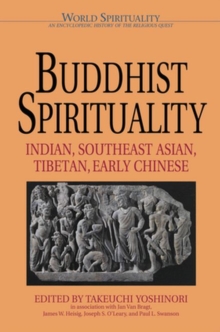 Buddhism has focused intensively on the aspect of religion that we call spirituality.

No religion has set a higher value on the states of spiritual insight and liberation, and none has set forth so methodically and with such a wealth of reflection the various paths and disciplines by which such states are reached.

The present volume covers earliy Buddhism as it unfolded in India, Southeast Asia, Tibet, and China.

Despite the great chronological and geographical sweep of this volume, a deliberate effort has been made to identify the distinctive core of Buddhist spirituality.

That core is found in two themes that pervade the book and offer a promising point of entry into the immense and often unfamiliar world of Buddhist thought.

They are meditation, which is central to Part One ("Early Buddhism and Theravada"), and emptiness, which is recurrent in Parts Two and Three, dealing with the Mahayana movement in India and its acculturation in Tibet and China.