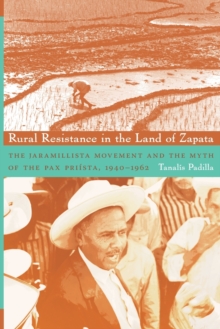 Rural Resistance in the Land of Zapata : The Jaramillista Movement and the Myth of the Pax-Priista, 1940-1962 Paperback / softback

In Rural Resistance in the Land of Zapata, Tanalis Padilla shows that the period from 1940 to 1968, generally viewed as a time of social and political stability in Mexico, actually saw numerous instances of popular discontent and widespread state repression.

Padilla provides a detailed history of a mid-twentieth-century agrarian mobilization in the Mexican state of Morelos, the homeland of Emiliano Zapata.

In so doing, she brings to the fore the continuities between the popular struggles surrounding the Mexican Revolution and contemporary rural uprisings such as the Zapatista rebellion.

The peasants known in popular memory as Jaramillistas were led by Ruben Jaramillo (1900-1962).

An agrarian leader from Morelos who participated in the Mexican Revolution and fought under Zapata, Jaramillo later became an outspoken defender of the rural poor.

The Jaramillistas were inspired by the legacy of the Zapatistas, the peasant army that fought for land and community autonomy with particular tenacity during the Revolution.

Padilla examines the way that the Jaramillistas used the legacy of Zapatismo but also transformed, expanded, and updated it in dialogue with other national and international political movements.

The Jaramillistas fought persistently through legal channels for access to land, the means to work it, and sustainable prices for their products, but the Mexican government increasingly closed its doors to rural reform.

The government ultimately responded with repression, pushing the Jaramillistas into armed struggle, and transforming their calls for local reform into a broader critique of capitalism.

With Rural Resistance in the Land of Zapata, Padilla sheds new light on the decision to initiate armed struggle, women's challenges to patriarchal norms, and the ways that campesinos framed their demands in relation to national and international political developments. 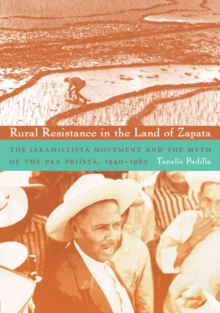 Rural Resistance in the Land of Zapata