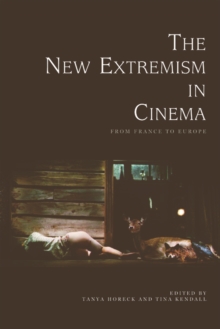 The New Extremism in Cinema : From France to Europe Paperback / softback

This is an exploration into the darkest side of cinema.

Explosive images of sex and violence in films by directors such as Catherine Breillat, Gaspar Noe, Michael Haneke and Lars von Trier have attracted media attention for the ways in which they seek to shock and provoke the spectator into powerful affective and visceral responses.

This first collection of essays devoted to the new extremism in contemporary European cinema critically interrogates this highly contentious body of work and demonstrates that these films and the controversies they engender are indispensable to the critical task of rethinking the terms of spectatorship. Through critical discussions of key films and directors, this book sheds new light on cutting-edge debates in Film Studies regarding sexuality, violence and spectatorship, affect and ethics, and the political dimensions of extreme cinema. Including important new work from internationally renowned scholars Martin Barker and Martine Beugnet, as well as combining a range of approaches to extreme cinema across audience research and theories of spectatorship, this exploration of the darkest side of cinema is an invaluable resource for film scholars and students.