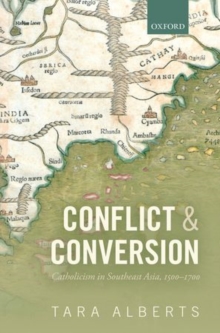 by Tara (Lecturer in History, University of York) Alberts

Conflict and Conversion explores how Catholic missionaries, merchants, and adventurers brought their faith to the strategically and commercially crucial region of Southeast Asia in the sixteenth and seventeenth centuries.

This region conjured visions of the exotic in the minds of early modern Europeans, and became an important testing ground for ideas about the nature of conversion and the relationship between religious belief and practice.

Some SoutheastAsians adopted Christianity - and even died for their new faith - while others resisted all incentives, menaces, and cajolement to reject their original spiritual beliefs and practices.

In this volume, Tara Alberts explores how Catholicism itself was converted in this encounter, as Southeast Asian neophytesadapted the faith to their own needs.

Conflict and Conversion makes the first detailed exploration of Catholic missions to the diverse kingdoms of Southeast Asia and provides a new connective history of the spread of global Christianity to this crossroads of the world. This volume focuses on three areas which represent the main cultural and religious divisions of the broader region of Southeast Asia: modern-day Thailand, Vietnam and Malaysia.

In each of these areas, missionaries had to engage with a variety of political and economic systems, social norms, and religious beliefs and practices.

They were obliged to consider what adaptations could be made to Catholic ritual and devotions in order to satisfy local needs, and how best to counter local customsdeemed inimical to the faith, which obliged them to engage with fundamental questions about what it meant to be Christian.

Alberts seeks to uncover the conflicts over these issues, and the development of the concept of conversion in the early modern period.