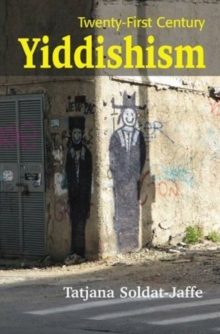 Drawing on sociolinguistics and cultural studies, this book examines transnational critical debates about teaching Yiddish over the last hundred years.

It looks at the ways a contested pedagogical terrain comes to define a minority language's on-going resources of cultural and ideological resilience.

From the inaugural international academic conference on the language held in 1908 in the Austro-Hungarian empire to the rise of Yiddish home-schooling and the surge of interest as a subject of secondary language study in recent years, the status, turf-sharing conflicts and pedagogical frictions surrounding the shuttling of Yiddish back-and-forth reveal a fraught yet surprisingly dynamic situation.

Through historical and comparative analysis -- including archival work, surveys, interviews, close textual reading, discourse analysis, and ideological critique -- the author reports on three critical case-studies for the language's futurity: ultra-orthodox Jewry in the UK, "heritage" learners in the US, and "multi-cultural" non-Jewish learners in Germany. The volume addresses several timely preoccupations in the fields of both Jewish Studies and Linguistics, pulling together multiple strands from the humanities and the social sciences concerning the evolving politics of language, pedagogy, transnationalism and diaspora, the meaning of heritage languages, and religious and ethnic identity in the modern era.