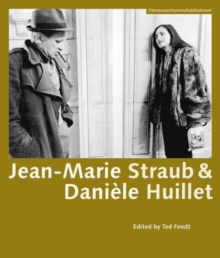 From their first film in 1963, Jean-Marie Straub and Daniele Huillet distinguished themselves as two of Europe's most inventive, generous, and uncompromising filmmakers.

From Machorka-Muff (1963) through These Encounters of Theirs (2006), and in the subsequent solo work of Jean-Marie Straub, they developed groundbreaking and unique approaches to film adaptation, performance, sound recording, cinematography, and translation in films made across Germany, Italy, and France - including such modern classics as The Chronicle of Anna Magdalena Bach (1967), Moses and Aaron (1974), Class Relations (1983), and Sicilia! (1999). On the occasion of the first complete North American retrospective of their films in more than two decades, this volume traces the history of Straub's and Huillet's work, placing their films in the specific cultural, linguistic, and critical contexts in which they were produced and providing an account of their distribution and reception in the English-speaking world.