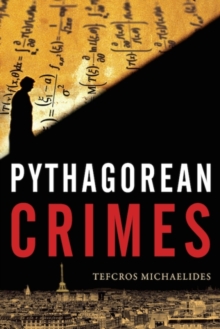 Set in an era witness to some of the most avant-garde and scintillating scientific discoveries and artistic creations of the last century, this novel takes readers behind the scenes and into the lives of many of history's most fascinating and revolutionary minds, all while posing the question-could a mathematical discovery be so controversial and threatening as to drive one to kill?After the murder of his best friend lands Michael Igerinos in the center of the investigation as the prime suspect, he is transported back to the turn of the 20th Century, into the heart of Bohemian Paris and the sensual, hedonistic pursuits of the artists who haunted its infamous Moulin Rouge.

There they are privy to the tormented genius of Toulouse-Lautrec, the twisted, visceral perspective of a young Picasso, and the wild exploits of les artistes de Montmartre. Michael and Stefanos meet at the groundbreaking Second International Congress of Mathematics in 1900, at which the greatest mathematical minds of the 20th Century-Hilbert, Poincare, Bertrand Russell, Goedel-probed the depths of mathematical mystery and challenged the very foundations on which all of mathematical theory is based. Their mutual passion for uncovering the deepest, most elusive secrets of the universe unites them and their search for mathematical discovery draws them down a dark path whose tragic end neither man could possibly foresee.