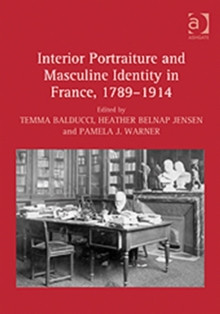 Focusing specifically on portraiture as a genre, this volume challenges scholarly assumptions that regard interior spaces as uniquely feminine.

Contributors analyze portraits of men in domestic and studio spaces in France during the long nineteenth century; the preponderance of such portraits alone supports the book's premise that the alignment of men with public life is oversimplified and more myth than reality.

The volume offers analysis of works by a mix of artists, from familiar names such as David, Delacroix, Courbet, Manet, Rodin, and Matisse to less well-known image makers including Dominique Doncre, Constance Mayer, Anders Zorn and Lucien-Etienne Melingue.

The essays cover a range of media from paintings and prints to photographs and sculpture that allows exploration of the relation between masculinity and interiority across the visual culture of the period.

The home and other interior spaces emerge from these studies as rich and complex locations for both masculine self-expression and artistic creativity.

Interior Portraiture and Masculine Identity in France, 1789-1914 provides a much-needed rethinking of modern masculinity in this period.